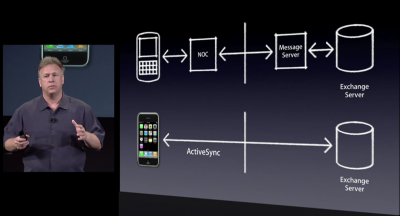 Recently, I had two problems come up. Neither of them are really horrifying but the experiences that I had show why Apple dominates the markets for consumer-oriented electronics, and why RIM’s Blackberry, Obamania aside, is declining.

I should start out with a confession: I’ve been a systems administrator at a variety of levels on several network OSes, including Solaris, HP-UX, Windows NT, some Linuxes (“Lini?”), and a couple of DEC variants, along with supporting or creating support for other systems like Mac OS and Windows desktops. I’ve even had a DEC Alpha and a Sun Enterprise 2 sitting under my desk. All that to say that I’m not a technical idiot, although I am now old enough to want somebody else to do all the heavy lifting. Still, I’m used to the software and system upgrade procedure and with problems with hardware.

Here’s the story:
The Apple Experience

On Saturday night, I noticed the power block for the Macbook was going bad. It would no longer charge my laptop. Since the connector is patented by Apple, there are no secondary manufacturers: you’ve got to get one through them. The local Best Buy stores, a large American electronics retailer, failed their Apple certification so can’t sell Apple products. This left me with one of the Apple store in Chicago.

I first looked at the Apple.com knowledgebases to see if there were any troubleshooting techniques I could use. I googled for the problem and the first thing I went to answered my question. It looked like the wire had broken underneath the gray plastic cord covering. At the bottom of the page was a note saying that you may want to check in with the Apple Geniuses at the local Apple Store because it may be freely replaceable.

Well, I’m all over saving $80. Plus, the local Apple Store is near my old partner, Jim, whom I hadn’t seen in awhile. I could run out the next day and meet him for awhile, then hit the Apple Store in Oak Brook, Illinois, a western suburb of Chicago.

I clicked the link which took me to a online reservation system for the Apple Geniuses. These folks are just youngish Apple nerds (I use the term affectionately) who know a good bit about the Macs. The interface was clean and easy to use: I got a time at Oak Brook for the afternoon and called Jim to setup a chat at a nearby restaurant.

This was Super Bowl Sunday, probably the largest non-religious non-holiday in America. But the Apple store still had lots of people in it. It took them a few minutes after 1:20pm to get to me. But they called my name and I showed my problem to him.

He looked at it, searching for more than normal wear and tear. He tested it on one of their boxes, then went to the back. Came out in a couple of minutes, unboxed a new power supply and gave it to me.

I use a Mac because I got one at Fermilab and realized that with the new Intel chip, I could pretty much run all my Linux apps because Mac OS X is built on BSD. Tasty Mac candy shell on the outside, chewy Unix-y goodness on the inside.

Unfortunately, Blackberry really doesn’t support updating their devices through a Mac. Using Parallels is iffy — doesn’t work is another way to look at it. I have to power up the old USB 1.0 WinXP laptop, and I rarely get around to it. I can synch my contacts and calendar on the Mac with PocketSync so I haven’t bothered with an Blackberry OS (BOS) upgrade in months.

I decided to try do it, and upgrade to the much ballyhooed BOS 4.5 on my AT&T Blackberry Curve (8310). Supposedly, the new Mac syncing application allows you to do this. I downloaded the app, and after hours of trying to get it to install (it searches for about 40 minutes looking for, well, dunno) finally got it working. Then it locked up my machine.

So I fired up the old PC, downloaded all the new BOS applications for syncing and 2 hours later had it all working. I synced the Blackberry Curve. It had to erase all my old apps.

It took me hours to sort out all of the problems with my existing applications. My old Google apps started acting funny. My email app failed. (Doesn’t work on this version apparently.)

I’m now back up, but only after realizing that, *bonk* I could’ve had a V-8! No, wait, I mean iPhone. Apple is a control freak that has destroyed a lot of things, but the app store works and the iPhone apps work. Plus it not surprisingly will sync perfectly with my machine.

I’m not a marketer but it strikes me that no matter how great your product is, you have to solve these support issues or you’re going to lose customers in today’s markets. Maybe it’s the challenge for service delivery. Maybe it’s that the Blackberry is really designed for corporate users (which doesn’t explain why you can’t clean the trackball but have to replace the device) whereas the iPhone is a personal item.

I dunno but I know that I’m much more likely to buy an iPhone.

On a final customer service note, today I used the “beta” MyFonts.com site to purchase a typeface I’ve been looking at for some time. Something went wrong and my purchase came out in Windows TrueType. Not entirely useless to me but I prefer OpenType faces. I sent off an email to the support address, and within 15 minutes I had a reply apologizing for the problem on the new site (it is beta, after all) and explaining how I could resolve the issue immediately. I even got a real person’s name to respond to.