When I went to Vancouver, I was castigated by a family friend for having a company name that doesn’t make any sense. If you haven’t kept track, although I use a few Brand Names, my company name is “The Manasclerk Company”.

“It makes me think of deranged sales associates at Sears,” he said, not a little derisively.

I pointed out that between Lands End and Craftsman (and, let’s be honest, Kmart), I buy a lot of stuff from Sears. Didn’t make him happy and he proceeded to berate me for not doing this other thing. He bought dinner, and I’ll put up with a lot for sushi, so I shut up and nodded a lot.

Still, I suppose it is true enough that I’ve not done a good job saying what “manasclerk” means. If you’re interested, this post will let you know what it is. 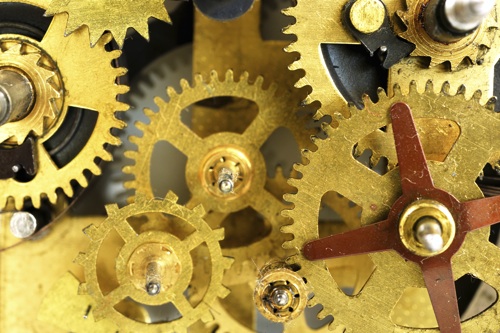 Back when I created my first commercial website — an online catalog for industrial safety and transportation products — I had to get a new account for my personal email to separate it from my work email and to differentiate me from Forrest W. Christian, who at the time was considerably better known on the Internet. As a private joke for my oldest brother, I chose the handle “manasclerk”.

And it’s stuck with me, for a variety of reasons.

When I started my company, I wanted to leverage what I saw as an existing “brand” of that handle. I had owned an Illinois-based company called Process Write, Inc. but wanted to get out of Illinois laws and tax madness. I started this new company in Indiana and named it “The Manasclerk Company”. It was to be a holding company of sorts for different brands, allowing me to do the different things that I was already doing under Process Write but separated into different brands, like Secret Rules of Career Success.

Although “manasclerk” has always caused some raised eyebrows, the questions really started when I opened the new company.

I’ve always maintained that the name didn’t mean anything other than the private joke with my brother. There was a meaning there, but I wasn’t really willing to explain it. In the last 15 years, I’ve had lots of people tell me what they took to be the meaning.

And some of them are brilliant in how they explain what I’m really trying to do.

It turns out that that “manasclerk” can mean be parsed three ways:

Any of them give us two main words to define in relationship to each other, “manas” and “clerk” 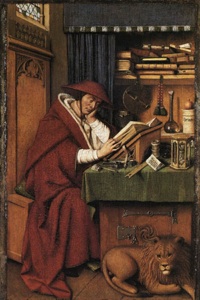 “Clerk” actually has several meanings. My original meaning was the ancient one: “scribe”. But it also connotes “scholar” or learned person, as the clerks were some of the few that could actually read and write. They are record keepers. Hence “Nonesuch Clerk”, the anonymous writer of so much medieval literature.

In the United States, it has come to mean the salesman or floorwalker in a retail store. In a department store, the clerks are the people behind the counters. It’s more than a simple “cashier”, someone who just takes your money. It’s someone who is providing you service in a deeper way to find the product you want.

A churchman’s meaning is of any clergy or ecclesiastical, or even a parish office.

In government, a clerk an official role vested with specific powers and authority, such as to issue writs as ordered by a court.

Manas is the hero of the ancient Kyrgyz epic poem, the longest in verses of any epic poem, longer even than Iliad and Odyssey combined. Some have even made connections between Manas and “Manasseh” (more on that later) and even “Messiah”, but it’s probably specious. Manas is the man in Kyrgyzstan, where lots of stuff is named for him. There’s even a national park in India that may ultimately have been named after the hero. 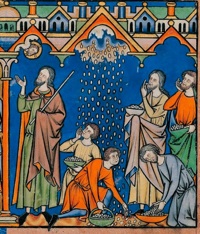 “Manas” could also be seen as a misspelling of the biblical “manna“, the bread of heaven that YHWH dropped to the Israelites in the Exodus, feeding them. This would render the name “Manna’s Clerk”.

It also has overtones of biblical Manasseh, the son of Joseph of the many-colored coat. Manasseh is a name that implies “who makes to forget”. Genesis says:

Joseph named the firstborn Manasseh (Forget), saying, “God made me forget all my hardships and my parental home.” He named his second son Ephraim (Double Prosperity), saying, “God has prospered me in the land of my sorrow.” [Gen. 41, The Message]

Joseph was able to forget, to stop remembering, that his brothers had beaten him and thrown him into a pit to kill him, that slavers had come and taken him, never to see his home again. Manasseh means therefore more like “I have been able to move beyond it, it’s not always in the forefront of my mind.” It’s the first step in redeeming sins done against you.

There’s also the biblical King Manasseh, who reigned longest of any king of Judah. He’s mostly known for wickedness, but he repents and becomes righteous during his long reign. He has a penitential book in the Apocrypha.

Manas also has several meanings in Asian spirituality, all associated with thought or truth. Early Buddhism thought of manas as “mainly the mental activity which follows from volitions, whether immediately, or separated by time and caused by the activation of a latent tendency.” More recent Indian use may be closer to “pure thought”, but it seems to have a vague meaning. (Like “soon” when my 3 year old asks me when we’ll get there.) Manas has also meant a form of “truth” in a different time.

(Sanskrit: “thought”), in Indian philosophy, the human “mind,” that faculty which coordinates sensory impressions before they are presented to the consciousness. Thus, when a person sees, hears, and smells an object—three different and not necessarily related impressions—the manas makes certain that he is conscious that it is the same object.

My partners have described the meaning of manasclerk to them in several ways:

To my thinking, the meaning behind the joke with my brother has been superseded by the meanings my partners have found. The meaning depends on what I bring to you. It’s all about thinking and serving, though. It’s not nonsense and never was.

The meaning of “manasclerk” for you is up to you. That may be oh so postmodern of me but then again:

You are the killer app.