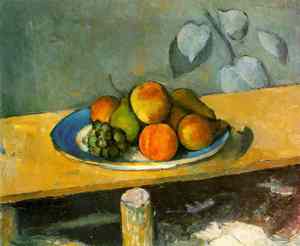 Last week we did the test of the new system for my web-based seminars and it went great! I’m glad we had the technical glitches that we did, because that’s what a test is for after all. Later this week, the newsletter readers will get first crack at the new set of webinars on the Secret Rules of Career Success. (See the link in the sidebar.)

Today, let’s deal with the “Young Genius” vs. “Old Master” ideas of David Galenson. Galenson, a professor of Economics at the University of Chicago, came to what is probably a pretty straight forward idea but one that troubles the fields of art and economics both.

Galenson studied artists and why a particular painting would be worth this or that. He usually sums up the argument by contrasting Pablo Picasso with Paul Cézanne. Galenson studied both auction prices and the paintings selected to appear in textbooks over time. The latter has its short-comings (paintings in Russia, for example, almost never made it in during the Soviet period, nor those that were stolen during the wars) but it produced something odd:

In almost all cases, the largest number of an artist’s paintings included in textbooks and retrospectives were painted at the same age that his or her works brought the highest prices at auction. For Cezanne, auction prices are highest for works made in the last year of his life, when he was 67. For Picasso, the highest prices were for works he did at age 26. The age at which Cézanne paintings were most likely to appear in textbooks was when he was 67. For Picasso, it was age 26. In the two artists’ most recent retrospectives, Cezanne’s best year was age 67. Picasso’s was 26. I’ve done this analysis for several hundred artists. [from Smithsonian interview]

Creativity, Galenson argues, comes in two different forms. In “conceptual” creativity, this tends to be people who have a Big Idea and then milk it for the rest of their careers. Most economists are Conceptual people. The Art World worships these folks, too. They are the Young Geniuses who come out of nowhere and do amazing things.

It’s not that Picasso didn’t study. He did. He was doing amazing things at 12, so he had been painting for the requisite 10 years to have mastery over the techniques he needed. But his paintings come whole cloth, all at once. For the Young Geniuses, Galenson argues, the idea is the thing: execution can (and often is) done by someone else.

The “Old Masters” are the creatives like Cézanne. It’s not just that they take years to develop, although that’s true. It’s that they are Experiential rather than conceptual. It’s an entirely different way of experiencing the world.

Burgeoning fields are often about Stars, the young people who have already made a great contribution to the field. The problem is that after that, they are usually done. Because they were not involved in the underlying elements of their field, they usually don’t contribute anything else.

There are some big exceptions that try the rule. Here in Indiana, one can easily think of Larry Bird who followed being an NBA superstar with 1998 NBA Coach of the Year and a conference championship in 2000. Even in athletics that require youth, people like Michael Jordan and David Robinson lacked star status in high school but through hard work and a systematic approach to perfecting the sport (and, in Robinson’s case, a massive growth spurt in college) led to increasing levels of performance. [Basketball fanatics can feel free to correct my examples here.]

The idea is fairly well known in the publishing world, too. Normally, there is a great debut novel. These are often by young people who amaze us all. Often, however, there is no second good novel, or not even a second novel at all. One bright shining moment. Others work forever to get that first novel published, then continue to develop as writers. They continue to add to the field, building the foundations of the field.

I’ve said before that one of the reasons that EJ’s work is resisted is that it prevents stars from working. You can’t be a hero: you have a much more predictable environment even in areas that are not predictable. (and the general idea of levels of work, including as developed by Billis, Stamp, Rowbottom, Kinston and others) is res

And this is a pretty good reason for resisting it. But it also illustrates a fundamental problem in at least American values and thinking.

America worships the Star, in business, the arts, religion. We love the youthful genius.

Taleb, the “Black Swan” thinker, argues that the conceptual-ness of economics is the problem. Experiential creatives would take their hints not from theory but from reality. He doesn’t make the connection to Galenson, but it’s pretty obvious when you’re reading his stuff that the duality is there.

The problem is not that we should do away with conceptual thinking or young stars. We shouldn’t. It’s just that we’ve gone too far. We’ve excluded the other piece that has to be there for organized existence in human groups to really work. By worshipping only star creativity, we deny ourselves the

It’s the duality of creativity.

If you haven’t figured this out yet, most Hidden High Potentials are “experiential” learners rather than conceptual. It’s among the reasons that I think you can save the world.