The Atlantic this month reports, briefly, on research by Dan Ariely [whose Predictably Irrational I will be reviewing later this week], Uri Gneezy, George Loewenstein & Nina Mazar that is scheduled to appear in Review of Economic Studies:

The bonuses bankers have handed themselves in recent years aren’t just excessive—they may have hastened Wall Street’s collapse. Although cash incentives tend to make people work harder, expending too much effort can actually hinder tasks that require creativity, problem solving, and concentration. Anticipating large bonuses can lead to excessive self-consciousness and a focus so narrow that it warps perspective by blocking important outside information—like, say, common sense.

Many of you are interested in bonuses and how compensation works. I recommend the research. From their own summary, they point out

With some important exceptions, we observed that high reward levels can have detrimental effects on performance…

They cover the major research, much of which would indicate that large rewards are often detrimental to performance. I hadn’t heard about the Yerkes-Dodson law, and am pretty intrigued. 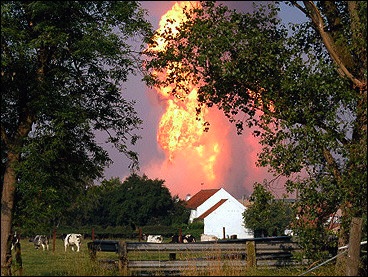 Perhaps not that explosive

Many conservatives and liberals will have much disparaging to say against these results, because they undermine the basis for many of their policies. Life, it seems, it more complex than their simple ideas.

There are more things in heaven and Earth, Horatio,
Than are dreamt of in your philosophy.

I’m also interested in how this plays out with felt-fair pay. Wilfred Brown and the Glacier works council eliminated piecework and timeclocks at Glacier Metal Company back in the 1950s. As far as Brown could tell, it never hurt performance and in most cases helped it. (Business is a complex environment and Brown wasn’t stupid enough to think that he could see all influences.) There seems to be something relevant here, that the reward has to be felt as fair, perhaps. Just a thought, and it’s tangential to the research.

A prerelease copy is available at the Review of Economic Studies website: “Large Stakes and Big Mistakes“ [PDF].