Maybe it’s obvious, but humans built organizations because they helped them achieve things. Networks are nice, and very useful, but the Organization (which is a subtype of network) works in more specific ways.

Daniel H. Burnham, the famous Chicago architect, felt something of this. Donald L. Miller, in City of the Century: The Epic of Chicago and the Making of America (1996), notes that Burnham and Root started building a large organization, unlike most architectural firms before it in the city.

“From the hour that the ground for a new building is put at his disposal the work of construction must go on at the highest rate of speed,” said Montgomery Schuyler fo the time pressures on Chicago architects. “And so the successful practitioner of architecture in Chicago is primarily an administrator.” And that is what Daniel Burnham became. “My idea is to work up a big business,” Burnham told Louis Sullivan when they first met, “to handle big things, deal with big business men and to build up a big organization, for you can’t handle big things unless you have an organization.” Peter Wight would later describe his former draftsman as “one of the greatest businessmen of all time. . . . As an organizer and promoter he stands with the commercial and financial giants of the day.”

Even as he worked on the Montauk project, [probably the first modern high-rise office building,] Burnham was putting together the largest, most professionally run architectural practice in the city, with an extensive research library and a team of draftsmen and consulting engineers, a growing practice he housed in the top story of the Montauk. “He was the dictator,” an associate captured him in his prime, “who organized the work of various mechanical and technical experts who contributed to the making of tall buildings.” [pp. 325-6; ellipsis in original]

It’s interesting because Burnham is both part of his time, when organizations were growing beyond their Level 3 state to something larger, and yet also showing something of a general truth. 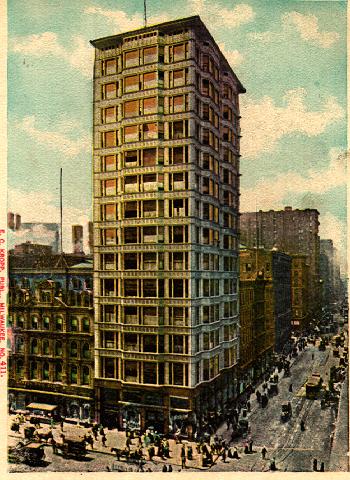 Certainly this was the thinking of the time (c. 1880) and his place. Chicago was a city where architecture was not art but commerce. Most of the buildings were funded by investors who wanted to see a good return. This drove functionality to the fore, unlike architecture in New York which remained artful and often frustrating to commerce. There was a place for ornament, as shown in the Rookery’s lobby, but it was where it would serve to sell office space rather than serve the architects dreams.

Also, the mechanical revolution was just beginning to hit the office world. Telephones and telegraphs allowed business to be dealt instantly and at arms’ length. Burnham’s main client may have never even come to Chicago, preferring his estate out east. The typewriter had started the record-keeping explosion. The capacity of any group of people was exploding. These new tools and their ilk allowed one office to control multiple locations easily. Organizations had to become more organized, growing to past Level 3, so that they could handle the new complexity of the environment.

And levels is all about managing complexity.

Burnham would not have required such a large staff before then, because he would not have had that much work.Large masonry buildings took longer to construct. Other technological innovations like the elevator, electric lights and flush toilets would require more work of the architect. The complexity of building increased. In order to handle this, he had to create a larger organization and have the capacity to manage the uncertainty.

I’m of the mindset that hierarchical organization isn’t evil. Unchecked hierarchy is, or at least will be since, as Lord Acton wrote in another context, “power tends to corrupt and absolute power corrupts absolutely.” But you still often need organization to get larger things done. The movement may not need it, but the publishing of materials for the movement does. The creation of markets can be emergent but the policing of them is not. Sometimes you have to organize to do something, especially big things like building a skyscraper.