Did you ever think that the reason why you didn’t get a mentor was that it was almost impossible to mentor you? A good mentoring relationship requires you to share a growth trajectory in how you handle complexity.

Most people’s capacity for handling complex work issues increases over time along predictable paths once in their 20s.

It sounds pretty deterministic, and maybe people can make themselves get more capacity to do higher level work. I have no idea. But most of us don’t. We pretty much get onto a path and stay that way. Dr. Elliott Jaques saw this in his work with people over time — he did work with Glacier Metal Company for some twenty-five years and it was replicated elsewhere — and even put the tracks into his graphs over time.

These paths look like trajectory arcs, as if some people were flung up higher and others closer to straight across. What’s odd was that it really did seem like most people’s development in this cognition stayed inside these bands. They bounced about a bit but more or less within a certain parameter. As if there was only certain ways that people could be flung, to beat the metaphor.

And why you hidden high potentials never could find one.

Let me show you why it was important and not having one really doesn’t say anything bad about you. Or the people you wanted as mentors.

(If you have had a good mentor or mentors in your life, you can go back to what you were doing.) 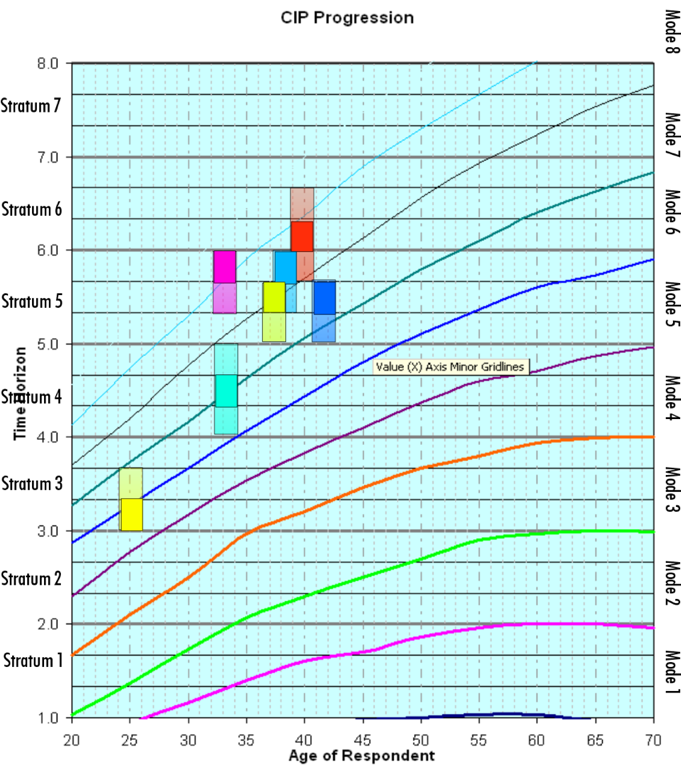 Growth Progression Chart, time by work level, showing real data. After Elliott Jaques. The chart shown here shows some of the hidden high potentials whom I assessed to determine their current capacity for handling decisions due over time. They may not be able to do the work, but they could handle the thinking necessary. (Note the trajectory bands.)

People on the same growth trajectory have some form of spooky connection with each other. Let’s take an example. A twenty-year old who currently feels comfortable with Level 1 decisions meets a sixty-year old who is comfortable working at Level 3. The young man can actually understand the big Level 3 thinking that the older guy tells him. The older guy seems to “get” the younger guy. It’s an amazing thing: the young man feels completely seen, understood. “He gets me” is a common phrase.

It’s not just telling you how to progress. I believe, strongly but intuitively, that this “recognition” that occurs between two people on the same trajectory is vital to proper emotional and spiritual development. Something doesn’t get wired right when it doesn’t occur. It is so powerful that it can feel like a conversion experience when it does happen. I have seen people in their 40s experience this for the first time. It is like being known for the first time. It’s terrifying and exhilarating and can be a real conversion experience, that experience in which you totally transform from one person into another. In kids, it unlocks a chain that prevents full action. When they get this, even from someone who hates them, it unlocks their potential in real and important ways.

And this is mentoring.

It’s not just that the guy works two levels up, and can therefore be the young man’s boss’s boss. That “manager once removed” role is supposed to “mentor” people two levels down. And because of the way worklife works, this boss’s boss is usually someone who is in your work trajectory. So it feels great.

The plurality of people in organizations today are tracking through that path of Level 1 at 20 yrs to Level 3 at 60 years. Because there are lots of people around, these people find mentors pretty easily. If there are fifteen managers in my company and six of them share my growth trajectory, but farther along, then I can find someone who fits me from a personality point of view. Out of six, I have a pretty good chance of finding someone who will also share my values.

If not, I can find them at my club, place of worship or family.

So far, so good. Normal people can find mentors easily and these mentors “get” them.

The problem comes when you are on one of these steeper trajectory paths.

If you take a look at my graph, you see that everyone seems to be on these steeper graphs. It’s not natural: I simply attract you people. I have no idea why. I could go into a large company of 100,000 and I’ll end up working with at least one or two on the team. These people are (supposedly) very rare. Just not around me, for whatever reason. I just run across y’all all the time.

But they are real evaluations, not guesses. These are CIP interviews I actually did and ran through. I even had PeopleFit look over a couple — I tend to undervalue people by ⅓ of a level or more. These are confident numbers, if you’re a Jaques-y person.

Important: none of these people are me. My evaluation put me much lower.

The trajectory gets important because the advice given to a twenty-four year old who is thinking at level/stratum 3 is very different from the advice that you would give to someone the same age who is more normal, say level 1 thinking. The former is a “high flyer”, someone who has the innate capacity to do some really big work of some form or another. When you give him advice that would work for that other guy, you’re not going to be giving good advice.

Hidden High Potentials can’t follow the same rules as everyone else because they don’t work for them.

Get that? The reason is that you were developing on a different trajectory than most everyone else. You’re weird and by the time you start reading me you will know how much of a disadvantage that puts you in the world.

But most of you tried really hard to follow that advice that you got. It was complete bullshit for you — and much of it generally bullshit, too — so when you followed it you didn’t get ahead.

Here’s why you got that bullshit advice by looking at one of these squares on the graph that represent a hidden high potential. Let’s take the dark blue person (at 42 years and “Stratum 5”) and see how mentoring works out for him. When he was 22, coming out of university and starting to work, he had a capacity to do work that required “level 3” thinking. He didn’t have the skills or knowledge yet to hold a role at that level, but he could do the thinking required. And your thinking is the ante into the game.

Which means that he was working at a level 1 role.

If he were looking for any type of real mentor, not someone who farther along his trajectory but just someone at a higher level, he’s going to have a hard time of it. His boss is likely level 2, but could also be level 1 — knowing how bad American management is. His boss’s boss, the manager “once removed” from him, would be only working at level 3 if he is actually fit for the job, and — once again invoking experience in many large American and European companies — it is likely he is level 2.

Finding anyone who is “bigger” than his current thinking will be incredibly hard to do. They aren’t going to be readily available in his workplace. He will have to try and attract the attention of someone who is at least his boss’s boss’s boss. That’s a manager twice removed, if the organization doesn’t have a lot of idiot filler roles stuffed in at the same levels. Which most do.

Odds on that being successful without marrying the owner’s daughter? (That’s how Wilfred Brown did it, by the way.)

Now let’s try to get him a mentor who is in his “trajectory”, that band he’s been growing on. He would need to find someone on that trajectory first.

Anyone on the odds of that?

It turns out that, as expected, the number of people who are on these steeper, higher trajectories are few, at least in generations other than GenX. (More on that later.) He is extremely unlikely to find one. Now, since I’ve seen that the majority of these people are working below their level, he might find one. But you people tend to get really bitter and don’t make very good mentors because of it. “Why should he have it easier than I did? What am I going to get out of it?” He’ll have to look for someone who is actually working up there. A

But people working at high levels see him working at a level 1 job and think, “Loser!”

No, really: that’s what they think.

If he reveals his current capacity to think to someone who is say Level 4 but in their 50s, he’s likely to see some serious backlash. I’ve seen people talk with these folks, older professionals in their field who afterwards have a myriad of excuses for hating on the younger one, the HHP.

Don’t go hatin’ about things that are unlikely to happen.

I hate that this was true for you. You deserved a mentor. I’m sorry that the God — the world, the Universe, whatever — didn’t give it to you.

Dr. Jaques saw this in his work with people over time — he did work with Glacier Metal Company for some twenty-five years — and even put the tracks into his graphs over time.