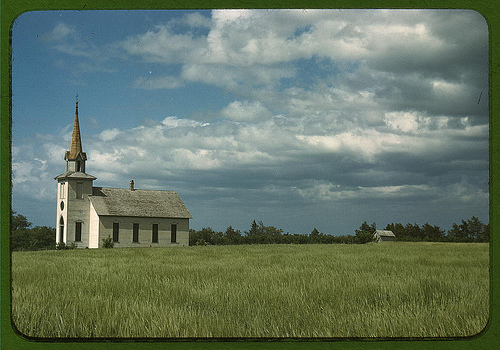 This continues my examination of American Evangelicals’ organization of their churches, both lay and clergy.

One of the big things in the Evangelical world, a real “game changer” they say, is the multisite church. You’ll hear them say things like “twenty years ago, the Holy Spirit was moving and doing a big thing. And people listening to Him said, ‘It’s time to develop a multi-site church model.'”

The multisite church model is also called the satellite model because it involves having remote congregations — that is, those who are not physically at the main congregation’s location — who hear the exact same sermon and sing or hear the same songs. Today this is done by having the sermon telecast, either by transcription or satellite or Internet feed, to the remote site. A local team of musicians (a band of sorts, and called a “local worship team”) plays songs whose choice and order is determined an executive team at the main site.

A clergyman is based at the remote site but does not preach sermons or homilies, which are delivered via large video screens. The local clergy is responsible for managing the local volunteers and insuring that they work according to procedures specified by the main site.

Volunteers are usually only permitted to work after undergoing training by head volunteers or paid staffers from the main site, and working several weeks at the main site. This is sometimes impossible, as the remote site is in another state. In these cases, the initial staff is usually large enough to train and control the local volunteers according to the standards and procedures of the main congregation.

By “main congregation”, we usually mean “executive paid staff at the main site”.

Decisions are made by going through the clerical or staff chain of command. Few decisions that are made at the local level can be appealed, because they are made in accordance to a strict set of methods and standards set in place by the executive staff of the main site. Local parishioners may have representation on an advisory board at the main site. This representation is usually via numbers, much like the U.S. House of Representatives. There is no per-community representation as per the U.S. Senate, so satellite congregations will have little voice in how things are run.

This may be moot, as most of the multisite churches follow the Megachurch model. In it, all power is concentrated in the chief executive, who often chooses the board members, and “fires” those who get in the way of his desired changes.

Supporters of this model naively call it revolutionary.

Let’s look at what it really is.
The multisite model has some key characteristics:

In the end, you have a way for those in power to assume more power and control over other people’s lives. This is usually effective, but we should recall that National Socialism was massively effective, too: effectiveness may not be the greatest of all virtues. (We’ll see later that this effectiveness has a downside that is rarely explored.) Once the power structure is in place, it is very difficult to remove a leader of a multisite church or even have a public disagreement with him.

Let’s take a look at each one of these points.

You should be able to step into a church miles away from your home and not have any surprises. The different congregations operate according to the same strictly defined processes.

If you were Roman Catholic, this would sound pretty familiar. Especially during the pre-Vatican II days, you could expect a reasonable sameness in every nation, even across language divides. The mass would be in Latin and the church calendar determines what is read, celebrated and often even homilized.

Therefore, we can say that this part of the model is not new. The delivery mechanism is different, but providing a standard experience across locations has been done by Catholics and Anglicans, and to a lesser degree Lutherans and Greek Orthodox.

All preaching is either given by the main site’s executive staff and delivered via video, or the content of the sermon is determined by them even though it is delivered locally.

Michael Quicke has argued persuasively that preaching is central to the Evangelical church experience and spirituality. You can then see it as the main source of information for the parishioners.

This is very like the control that the Vatican exerts over what can and does happen inside local congregations. Again, post-Vatican II this has loosened to a great degree. The multisite Evangelical church model more resembles pre-Vatican II Roman Catholicism on its control of information.

Power Centralized in a Single Person

Protestants have preached for centuries against the power of the Pope. The very idea that someone can be infallible is anathema to them, regardless of the extreme limitations on papal ex cathedra utterances.

It is surprising how they have embraced the centralization of power within a single person in the all-powerful Head Pastor.

This is one of the main points of the Megachurch organizational model, that the chief executive have total control over the hierarchy of both staff and volunteers, and control the membership of any Board (e.g., an elder board) who is responsible for pastoral oversight. As the multisite model is an outgrowth of the megachurch model, it has the same defining principle.

It’s not surprising that Christians want to organize with a single, infallible leader controlling the entire community. What is surprising is how a tradition that was created in opposition to such has so fully embraced it.

As you can see, the multisite church model popular today among Evangelicals is really the same as the liturgical model under other, traditional denominations, except lacking the various political controls these have built over the centuries. Church experience is defined by an elite group of clergy and variation is not tolerated.

Except for the use of video to further standardize the experience — the sermon is not just based on the same passages and calendar, it is the same sermon entirely preached by the same man — and the use of technologies to expand the standardization, the model is the same as the ancient, pre-Vatican II Roman Catholic model. It is an effective model that Evangelicals spent centuries rejecting and preaching against. Their embracing of it indicates a major shift in values among them.